My logo: that gorgeous young lady who is looking toward us from every page is Miss Amy Rowe, then aged about 8 months in 2011. The amp she is lying on is my (second!) Princeton Reverb II with EVM12L speaker (it had a Fender 15F label on the massive magnet; but it was definitely just a 12″ cone). I ended up selling the PRII and keeping the Fender Super Amp and Fender ’65 Deluxe Reverb Reissue.

This is in draft form only; I’ll complete the reference list later. Here is a sample:
http://www.worldcat.org/
https://archive.org/

DARR, J. (1973-3e). Electric guitar amplifier handbook. Indianapolis, H.W. Sams.
See a description about Push-Pull amps from p.10f.
This website devoted to Australian Valve Amps (AVA : Oz tube guitar amps) is one site that has the original book available for download in chapters that have been converted to PDF

WEBER, G. J. (1994). A desktop reference of hip vintage guitar amps. Pflugerville, Tex, Kendrick Books.
ISBN 9780964106000
The most dog-eared book in my collection, it is next to my chair (along with a couple of collections of A4 schematic copies) for handy reference. The only other music gear related books that have got such treatment from me are by Darr and by Legg.

Two new valve amplifiers, the Super and the Concert, were developed with the explicit aim of combining a vintage sound with the facilities deemed essential by modern players, including a line-level output and a front-mounted mix control for returning effects into the final sound. Neither amp has channel switching, that being deemed inconsistent with the vintage ethos.

SMITH, R. (2005). Class ‘A’ Exposed & Explained. Petaluma, CA, Mesa/Boogie Ltd
Hardcopy (2011) and downloaded 20140525:
http://www.mesaboogie.com/US/Smith/MESA_Class_A_Booklet.pdf now archived. – an interesting treaty on how guitar amplifiers may be classed once the marketing team get in on the act; but refer to the Radio handbook and Receiver Circuitry and operation by Alfred A. Ghirardi: Radio and television for how electronics engineers correctly class Untuned Amplifiers.

Online: How the Fender 93 Super Amp and Concert Amp sound
Websites like Youtube and some of the forum sites have links to people demonstrating how the amps sound. While I do not endorse any particular link, I have included two links here from the surfguitarshredder site that I believe has been posted by Patrick Stefurak. I am grateful to be able to use these links as generic vision of the amps in use. I currently do not have access to video equipment suitable to upload vision and sound of my amp.
How the Fender 93-95 Super Amp (4×10) sounds
How the Fender 93-95 Concert Amp (1×12) sounds
Note that there may be a difference in the volume of each clip on your PC.
Please let me know if you also have a clip suitable for me to use here.

Note that the ’93 Concert (PR245) and the ’93 Super Amp (PR244) used the same amplifier design and only differed in their complement of speakers and cabinet size (see catalogue photos, below).

Modifications
There’s nothing to stop the owner of a Pro Series Fender 93 Super Amp or Concert from ditching the existing circuit board and modding the amp with a hand wired circuit board. These sorts of rebuilds or modifications are being done to modern amplifiers like the Fender 65 Deluxe Reverb Re-issue, where the existing PCB board is replaced with a traditional turret board. I know that some will counsel that the best way to get a modded amp sound is to sell your current amp and go buy a new one; but there are plenty of DIY modders out there that have gained a lot of satisfaction and knowledge by modding their amp. (In 1982 my first amp mod was a genuine non-reverb Fender ’64 Bandmaster that came with Channel 1 cascading into Channel 2, and the tremolo disconnected. I reversed all the mods but sold the amp due to downsizing and travel commitments.)

Video History::
Paul Rivera Interviews
The media links you see are just supposed to be Text Links, not on-page media: my intention is that if you want to view the video then you can copy the link (if I add a link here the webpage automatically inserts the video; that is not my intention).
Youtube
http://www.youtube.com/user/Riveraprod/videos
“Paul Rivera Interviewed history Part 2”
see:_http://youtu.be/VX2aQ9xnLm0
Identifies:
(1) Joined FMIC after being offered role in early 1981.
(2) Schultz and others were ex Yamaha, ex Music Man
(3) 75 sold modestly well; it was a tweaked copy of the Mesa Boogie Mk II
(4) Proud to introduce Effects Loop on his designs, with variable input and output (volume) controls, and channel switching that was already being used on the Fender 30 (Therefore Fender 30 must not have been designed by Rivera).

“Paul Rivera explains TBR history & after Fender”
see:_http://youtu.be/1NFy2bCKayg
Rivera- Paul Rivera explains TBR history & after Fender
(1) Joined Fender in 1981 (CBS years) and designed a 5-year plan.
(2) Rackmount products were on the agenda, so designs reflected interfacing with rackmount products (and some were designed to be rack mounted, including the RP series that was featured in catalogs but was never produced).
(3) Left Fender end of 84 – early 85 after the consortium he aligned to failed in their bid to purchase FMI from CBS.

Order of pages on this site:
About Me & the Amp
Home Page: FMI 93 Super Amp
Overview
Photos Page – will include shots of my amp and other media
Sections:
– (1) Input Stage
– (2) Channel 1: the Clean Channel
– (3) Channel 2: the Drive Channel
– (4) The Effects (Fx) Loop
– (5) The Reverb
– (6) Phase Inverter
– (7) Power Tubes and Transformer
– (8) Speakers and Cabinet
– (9) Power Supply, Foot-switch and Logic
Schematics: Schematics, Circuits, User Manual, Servicing Manual
Summary and Reference
Discussion: Posts (also used as a sandpit)
There will be some comparisons made to previous and current designs; after all, there are a number of very good websites out there.

Two of my other websites:
Text Book Readings on Blogspot
LinkedIn Profile
20190730 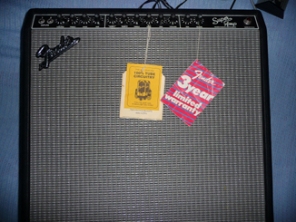 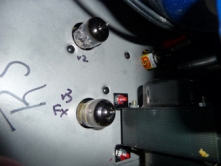